Turns out Sublime Science have been nominated for "Best Children's Party Entertainment" in the International What's On 4 Junior Awards!

It's a real honour and privilege to have been nominated for these national awards. They've been going for 8 years and there will be around 100,000 votes - pretty humbling stuff! 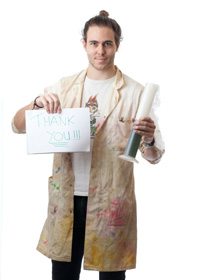 This nomination comes from the people that matter most (our customers!) and it means so much to me that so many have taken the time to support what we do, so...

I just wanted to take a sec to say thank you - we're so fortunate to get so much support from parents up and down the country that think children should get the chance to discover how awesome science can be and I really, sincerely appreciate it!

Fittingly for such fun awards they are being held at Drayton Manor Theme Park (in a conference centre rather than on-top of a roller-coaster I'd imagine!)

You can win tickets to the champagne reception as well as a family trip to Drayton Manor over on their website!

Obviously I don't want to influence you in any way 😉 but Sublime Science are finalists in the "Best Children's Party Entertainment" category and if you like what we do then I'd love you to vote for us!

Thanks so much once again,

P.S. Your support means so much to me and the Sublime Science team - if you can spare two secs to vote I'd really appreciate it 😀