Who Else Wants THE "Something Different" Entertainment that's 100% Guaranteed to be Absolutely Unforgettable! 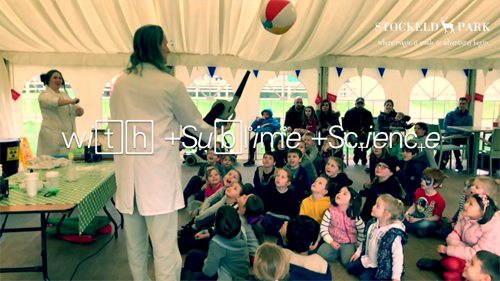 Have you got an event coming up?

Do you want as many people as possible to come along - and for everyone to have an awesome time?!

Make sure your entertainment has that 'Something Different' that children always crave.

Best of all, your unique children's entertainment is 100% Slimetastically Guaranteed - so you can sit back, relax and know your event will be absolutely unforgettable!

What Are People Saying About Sublime Science Entertainment?

Not only have Sublime Science enthralled more than 1,000,000 children but we've even won the backing of two Dragons on Dragons' Den and received Royal Recognition from Her Majesty The Queen.

"Thank you so much for your performance... The show was really enjoyable and the kids loved the noisy experiments with the balloons" - Top Trumps National Event

Children love our unique blend of awesome science and we've inspired and entertained groups from between 30 children up to thousands at events with Top Trumps, Arsenal Football Club, Mercedes, The National Science Museum!

How Does It Work??

An Experienced; CRB (DBS) Checked, Fully insured (never used, of course!) Slimetastically Awesome Scientist will travel to your location and Guarantee that both parents and children have an incredible time!

Your Way - We're more than happy to tailor what we do so it's just right for your event to make life easy for you - we run events too so understand you have enough on your plate!

No Stress For You - As you might expect we have an impeccable safety record, full public liability insurance, risk assessments and CRB/DBS checks - copies of which can be provided for your records if you need them.

We Make Things Easy - We bring virtually everything with us - all we need is the use of a table and access to electricity and we are able to set-up (and clear up) our equipment in 15 minutes if need be!

We'll adapt to make things a perfect for you but Making Sweets and Slime are just the beginning - there will be Giant Bubbles, Flying Smoke Rings, Fizzing Potions as well as a whole array of exciting experiments - for more details, read on...

How Sublime Science Love To Help!

"I’ll certainly keep your details on file for future performance as we do get asked for science shows on a lot of occasions and it fits in with what we do here very well!" - Dionne Alexander, Science Museum

"We loved the range of equipment. The fun element. Seeing the children’s faces light up was a delight. You inspired them to ask questions, encouraged them to have a go and never complained about the mess! I couldn't have asked for more. Thank you! Thanks so much, you were absolutely brilliant and totally surpassed my expectations" - Sarah Devonport, The Big Bang, NEC Birmingham

You know we've mesmerised more than one million children across the country with our unique blend of science education, and even taken on the Dragons in the Den but I want you to KNOW that we're going to deliver - so you can book in absolute confidence!

That's Why I Offer The Unique 110% Slimetastic Guarantee!

I Guarantee that the children will have a fantastic time, get excited about science & discover how much fun science can be or I'll refund 110% of the money you paid!

That's every single penny you invested, plus an extra 10% just to say sorry for coming up short!

I'm so confident in our unique entertainment and want to inspire as many children as possible so you can book an incredible educational experience for the children entirely at our risk!

My Accountant Says I'm Mad!Why would we do such a thing? I understand how important it is for you to get great value for money and I'm happy to put my money where my mouth is!

After close to a decade of offering this unique guarantee I'm thrilled to say not a single event has taken us up on it! (And we work hard every day to keep this up!)

You Won't Have A Single Piece Of Paperwork On Our Account!:

All we need is some space & we bring everything else for a mind-boggling day of science!

"We invited over 200 Junior Gunners and their families to join us at Emirates Stadium for a haunting Halloween-themed screening of Sunderland v Arsenal. Haunted Highbury was packed out with hair-raising football challenges, Spooktacular balloon making, ghoulish face painting and gruesome science experiments from Sublime Science. Is this something you can assist us with again? It was very popular last year and we would love to have you on board!" - Arsenal Football Club

A Rock-Solid Track Record You Can Rely On!

Sublime Science are proud to have worked with Arsenal Football Club, Mercedes-Benz, The Big Bang Science Fair, Top Trumps so you know we've got the track record to make your event a hit. In fact, we Slimetastically guarantee it!

Sounds Great - Can You Come To My Event?

We love to entertain at fetes, festivals and events all over the place - on occasion we do travel further but here's a quick list:

We've Got A Wide Range Of Ages Coming Along - Is That OK?

Absolutely! Sublime Science appeals equally to girls and boys and is something children love from ages 4/5 right up to 12 years old! Oh, and even the adults love to make slime!

How Early Should I Get in Touch?

I wish we could help everyone but after inspiring more than one million children and the success of Dragons Den we do book up fast!

After the success of Dragons' Den as well as inspiring more than one million children to discover how awesome science can be we do book up fast!

P.S. After the success of Dragons' Den and inspiring more than one million children - we do get booked solid so I urge you to pop your details in the form now!

P.P.S. As you know your Sublime Science Entertainment is covered by our unique Iron-Clad 100% money back guarantee - so you've got nothing to lose!

P.P.P.S. Ethical Bribe - Free copy of 'Don't Eat Your Slime' Just for getting in touch!

It's packed full of incredible experiments for curious kids and 5 star reviewed and costs £9.99 on Amazon & is packed full of experiments to bring science to life for children but I'll send you a 100% FREE ebook version immediately just for getting in touch!

It's all part of my mission to inspire children everywhere to discover how awesome science can be and it means that even if we can't make it to you we can still help get the children excited about science!

Let Me See Some More Feedback From Your Events Children's Entertainment!

"We loved all of it...you were great at keeping the kids interested and laughing in equal measures" - Fetes Children's Entertainment

"The show was not only great fun for both the kids and adults, but it also opened their eyes as to how science is both practical and fun. I can’t recommend Sublime Science enough!" - Festivals Kids Entertainment

"We did an evaluation with the kids about all the activities and Sublime Science got a full house of smiley faces. Well-done they loved it!" - Unique Event Entertainment

Considering doing something different to create an unforgettable experience for the children at your next event? You're in the right place! Our (always awesome!) Sublime Scientits live to inspire children at events in:

It could be that you're having a family fun day, or a library visit or running a science festival or launching a product. All that matters is that you have some children coming along and you want to make 100% slimetastically guarantee that they have an incredible time.

Where Do You Offer Your Events Entertainment?

Our journey to making science awesome for one million children has taken us across the entire planet but most of the time we bring science to life for children in England. The main places where we've entertained children are:

Outside those areas? All is not lost! All in all, we've inspired more than one million children in more than 27 countries. Get in touch. We'd love to help out if we possibly can!