Blown away, humbled & honoured to be able to share that I won Young Director of the Year at the Institute of Directors National Awards.

Thank you so much to the Sublime Science team and to so many other awesome humans for all your support….I may not have my hair but I’m still young!

It means the world to me to be recognised on a national level by such a prestigious organisation as the Institute of Directors. I was up against some incredible competition and was happy to be included never-mind go on to win.

It was an absolutely incredible event, held at the Lancaster Hotel in London. My (awesome!) girlfriend grabbed a quick video of me saying thank you, properly.

The event, hosted by BBC business correspondent Joe Lynam, took place at the London Lancaster Hotel in the capital. The awards are sponsored by the Centre for Board Excellence, Nasdaq and Hiscox, bring together finalists from regional heats across the UK, in categories ranging from Early Stage Start-ups, to Family Business and Large Company Directors.

Stephen Martin, Director General of the Institute of Directors, said:

“Congratulations to all of the winners today for their contributions to business and their communities. Success is built on great leadership and it is important to reward those people have made outstanding contributions to their sector”

It’s been an absolute privilege to be recognised alongside a group of incredible individuals. 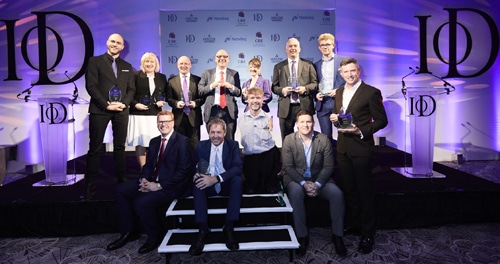 Two recent events have proved both inspiring and informative and given me a good shot of optimism for the future. The first saw me join a good number of East Midlands business leaders at the IoD Director of the Year Awards. It was good to see so many of the winners from our own awards in attendance, and especially rewarding to see one of our current stars, Marc Wileman from Sublime Science, named as the Young Director of the Year.

Anyone who has met Marc or followed his story will know just how charismatic and enthusiastic he is, both as a business leader and as a teacher. His goal at Sublime Science is to put the fun back into the subject and get children across the country to embrace science – which many have complained for a long time has become too dry and unrewarding.

He’s certainly done that – and how! He told me during the awards lunch that his business was soon to entertain its millionth child – that’s a fantastic achievement. The Government keeps on saying that we need to get more people into science at school and through that have more people ready to take on jobs in engineering and other hi-tech skills-based sectors: well, Marc seems to be tackling that agenda all on his own.

I was delighted to see him win, and I know from talking to others in the room who weren’t as familiar with the Sublime Science story how taken they were with both him and his business acumen. Well done, Marc.

All that remains is for me to say one extra ‘thank you!’