I had an absolute blast helping Dick and Dom make science awesome for their TV show ‘Absolute Genuius’!

Both Dick and Dom have awesome energy and enthusiasm and a real passion for what they do.  The only bad thing was their lab coats are nowhere near messy enough for my liking!?! 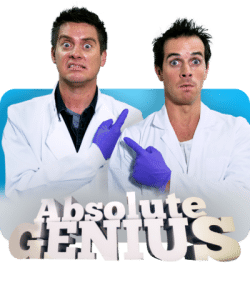 Dick & Dom were Awesoem but their labcoats are far too clean!

But as they were awesome fun to work with, I'll let 'em off! (I'll bring slime with me next time!)

We were in a super-secret location for surrounded by books, which is always a bonus!

But sometime soon you'll be able to catch a glimpse of me on the Telly again.

P.S. Absolute Genius is over on CBBC - keep a watchful eye, you might just see someone you know! 😉