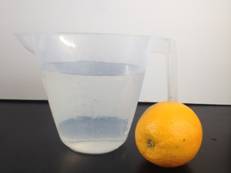 Not just a healthy snack! Next time you're about to munch on an orange take 30 seconds to give this little science experiment a try! It's super-fun, super-easy and a great way to get the kids thinking about density! 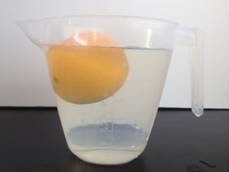 STEP1 - The experiment may be almost ridiculously simple but the look of astonishment on the kids' faces is priceless. First, fill your jug up with water.

STEP2 - Next, predictions! When you pop your orange in the jug will it sink or will it float? Pop it in and find out! (You can see from the picture that it'll float!)

STEP3 - This is the cool part. Peel your orange. Now make your prediction - will it sink or float? Pop your peeled orange in and find out! (You can see from the picture that it'll sink!) 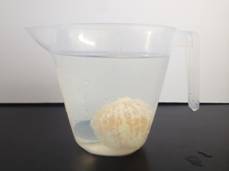 STEP4 - Don't waste your orange - when you're done experimenting - eat it!

Whether objects sink or float all comes down to density. Stuff that's more dense than water sinks and stuff that's less dense floats! (Density is just the word scientists use to describe how heavy something is compared to how big it is)

Your orange was initially less dense than water, so it floated but when you took the peel off, that made it more dense so it sank! The question is, why? The peel of the orange contains lots of trapped air, which causes the orange to float - take that away and it's more dense than water which is why you get your drowning orange!