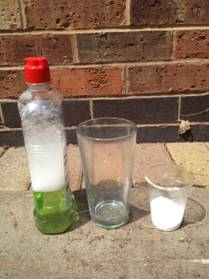 Whenever a science experiment involves something exploding or a rocket launch you're always on to a winner! This one kinda combines both so there's no way the kids aren't going to love this experiment!

STEP1 - Your washing up liquid bottle is going to be your rocket! It's best not to waste the whole bottle and to do this experiment when there's about a 1 cm layer left in the bottom of your washing up bottle! 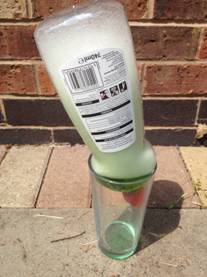 WARNING: Make sure to do this experiment outside! It's a great experiment but it does make a real mess, outside only for this one!

EXTRA WARNING: Make sure to only do this experiment with bottle tops that can "pop off". This way your bottle can never explode, as when the pressure gets high enough the top will pop off and that's what will launch your rocket!

STEP2 - Now the warnings are out of the way, let's get cracking! Fill your washing up bottle about a third of the way up with white vinegar and mix it in with the washing up liquid.

STEP3 - Add your bicarbonate of soda to your mixture of washing up liquid and white vinegar and quickly turn your rocket over and place it on the launch pad (in the pint glass!)

NOTE: Some types of bottle will need more pressure than others to blast off. If it's not going to launch you can flick the bottle top open and that will fire a stream of foamy goodness! Not as good as launching a bottle but still pretty good!

As the bicarbonate of soda reacts with the vinegar and releases carbon dioxide. The pressure builds up in the bottle and eventually it'll be too much and the lid will go pop! A gooey stream of bubbles will come out and your bottle will go flying off into the air!