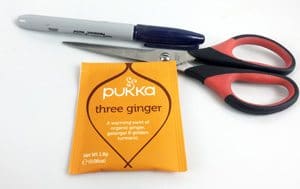 Normally, there’s not much better in this life than a decent cup of tea. Unless, of course, we’re approaching Halloween. Then it makes perfect sense to abandon a brew in order to make yourself a Spooky Teabag Rocket!

What do I need?

WARNING: Adult help is required for this experiment as it involves using fire.

STEP1 – Use your marker pen to make your teabag rocket look a little more spooky.

STEP2 – Get an adult to chop the top off your teabag with a pair of scissors and unravel your teabag to make your teabag cylinder. 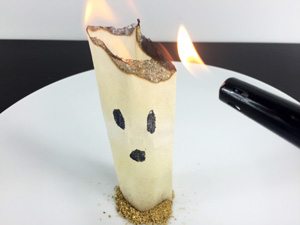 STEP3 – Use your tealeaves to make a little launch pad on your plate and make sure your teabag rocket is pointing straight up.

STEP4 – Get an adult to help out and light your teabag cylinder and stand back...

STEP5 – Watch your teabag rocket fly beautifully into the air!

You know how hot air rises? If you ever forget think of a hot air balloon and the fire they light to make those launch!

As your teabag is on fire this heats up the air and that hot air rises. The ‘normal’ surrounding air gets ‘sucked’ in to fill that gap and this lifts your teabag up. 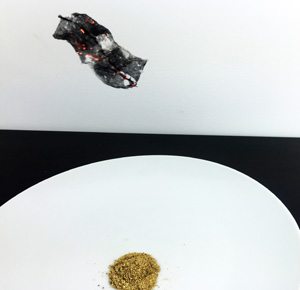 This is a great example of convection. As your teabag is on fire it obviously heats up the air around it. This means that air expands, gets less dense and so rises up.