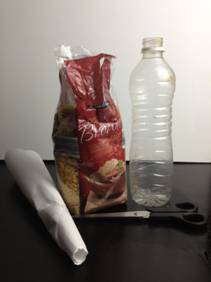 Another great science experiment and another one that involves food! This one is based on an age old magic trick and is an awesome way to learn about friction too! 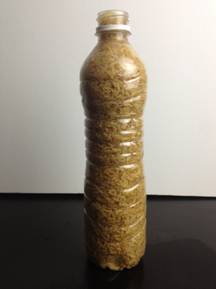 STEP1 - The first step is actually the most tricky and that's to fill your bottle with rice! (I found that the easiest way was to build yourself a little funnel with a piece of paper)

STEP2 - The trick that we're aiming for is to pick up the bottle just by jabbing in a pair of scissors! But first to prove what you already know, if you just jab your scissors into the top of the bottle and then lift them back up again they'll slide out and that's about it...

STEP3 - The next step and the trick to this whole experiment really is to compact the rice! Tap your bottle of rice on your desk and you'll notice the rice compacts down. Add some more rice to fill it up and repeat this process till it's jam packed with rice.

STEP4 - Now you've got the extra rice in there, it's time for the 'magic' trick! Jab your scissors into the rice and carefully lift up! As long as you managed to wedge enough rice into your bottle you'll now be lifting a bottle of rice, pretty cool, huh! 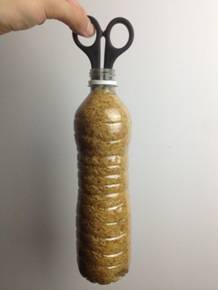 I love this experiment because it just doesn't look like it's possible. Everyone 'knows' that it's not going to work but it does! The reason has to do with friction. After you pack in more and more rice you're removing lots of the space between the grains of rice. This means that when you push the scissors into the rice there's not much space left and so the rice is pushing back against the scissors. It's this friction between the two that's just enough to make it work.