How to Make Cornflour Slime Video!

It's hard to beat making slime for a good honest bit of scientific fun - this is the simplest, quickest way to get your hands on some slime, let's dive in.

Just push play below and let's get started! 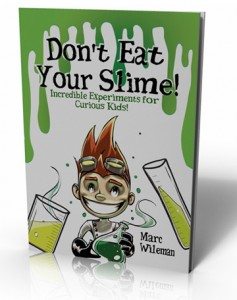 We value your privacy and would never spam you

How to make corn flour slime, this is the simplest type of slime to make in the whole world, but it doesn’t mean it’s not awesome and that you shouldn’t give it a go.

All you going to need is some corn flour; regular flour work well it doesnt have to be corn flour which you can just get from Tesco or any other supermarkets you desire.

Over here we just got some water with some food coloring mixed in; green is always best for making slime, everyone knows a real slime is actually green that’s the official way this thing works, so you get dome of our corn flour, put it into something to mix it, a bowl, add as much as you like really, I’m going to put in exactly that much.

This is a bit of messy experiment so best not to worry too much about that and then just bit by bit you’re going to add in your food coloring water until you got the perfect consistency to make the perfect slime; don’t put a whole lot in one go, if you put too much you’ll ruin the slime and have to start again.

So I’m going to add about that much, mix it around a little bit and when your slime is looking a bit like that, obviously that’s not slimy enough for my liking, put a little more in...looking very lovely and if you do in fact what I just told you not to do, your slime is a little bit too runny, but still fairly lovely; a little bit more runny than we want and if you do that just add in a little bit more corn flour to just kind of dry it out...you should have something looks a little bit like that, getting the perfect slime is actual quite tricky to get it just right, just want to finish mine up, there’s a bit of science involved in this slime that you’ve made ; that is perfect.

That slime is actually a non Newtonian fluid, so what that means is, it looks like it’s kind of like its half way between a liquid and a solid. So if you got it in your hand you kind of hit it, it’s hard, but if you let it run it becomes a beautiful slimy cute mess; that’s how you make corn flour slime, give it a go and let me know how you get on in the comments below.